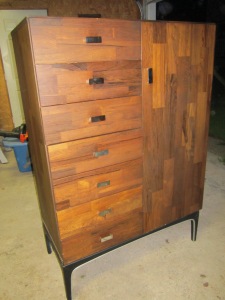 I am unsure about my very recent purchase…

So I set off into the sunset a few hours ago to pick-up a vintage dresser tonight that I found for sale online. I wasn’t sure about it from the get-go however I was on the hunt this time for storage rather than historic looks.

After a 25 minute drive in the country I arrived at my pick-up destination. I didn’t notice this until it was in the truck but it was a 523 Made in Canada Commode Chest Rosewood Pro.221. It had a stamp stating this on the back. I paid $85 for it which was not a steal of deal but warranted because it sure is solid. 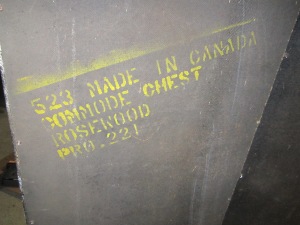 I had a short chat with my neighbour who helped me lug it into the garage (its temporary home) when I got home and we laughed about my cupboard on legs which may of one day (prior to today) contained a washbasin [for washing hands] and/or chamber pot [also know as a piss pot].

I am usually a stickler for detail however two guys helped me bring it out of the house and since the lady used in as a dresser I didn’t think anything of it -appearance wise. Anyways no excuses…there is a lesson here -that being – so called dressers can have a secret -that once upon a time they were used for commode-like purposes.

Commode chests are usually more ornate and fancy looking however it appears newer age ones may be more subdued. They generally have cabriole legs and were quite prevalent in the 17th century.

In the 18th century the wording commode started being used to describe a cupboard with a chamber pot. Antique commodes are definitely selling these days and can feature serpentine mahogany and walnut. Marble tops were a big thing for a while too. Some of the older commodes look more like a chest full of drawers -contrary to the way mine is with the side cubby with shelving. 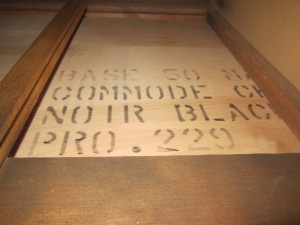 I sure got my lesson of the day! Look over things with a fine tooth comb.

P.S I am still going to use it as a dresser anyways…nothing a few Lysol wipes can’t fix. 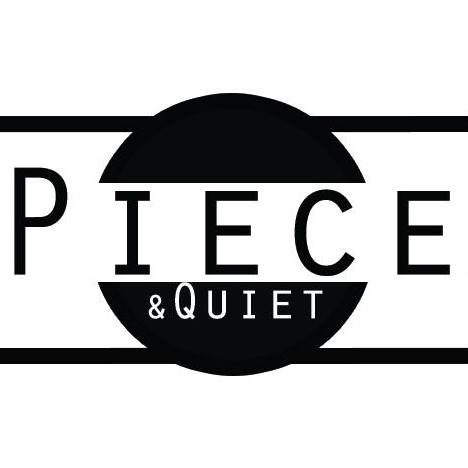